LFF preview: No and Grassroots

Written by Suchandrika Chakrabarti on 14 October 2012. Posted in Feature film

Grassroots and No are both political films based on real events that concentrate on the competition: to win a local election in the former film, and to win a regime-changing plebiscite in the latter.
The fact that No succeeds as an engaging film to such a greater extent than Grassroots shows that political races on film need to be contested by sharply-outlined protagonists. Furthermore, while there can be laughs, playing the whole contest for laughs kills the anticipation. Both films take us into the recent past: Grassroots to 2001 Seattle, and No to 1988 Chile. In Seattle, disaffected music journalist Grant Cogswell decides to run for a place on Seattle City Council, to help sort out the city's transport problem (the answer? MONORAIL!), and to oust the recumbent, Richard McIver, whom he sees as corrupt.

Cogswell calls upon his friend and fellow journalist, Phil Campbell (author of the book the film is based upon) to run his campaign. Hi-jinks ensue as the dappy Cogswell gets much further along the road to political power than you'd dare imagine or indeed want. 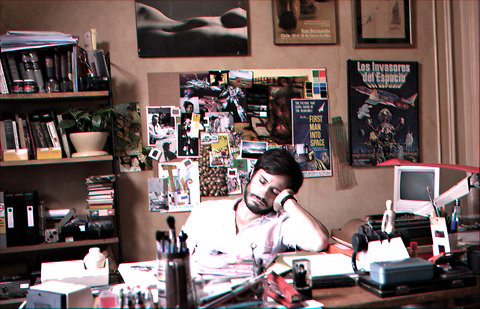 The stakes are higher in No. Chile's dictator, Augusto Pinochet, has been holding on tightly to the rains of power since ousting the left-wing President Salvador Allende in 1973. Now facing increasing international pressure to prove the legitimacy of his military junta - and to win another 8 years in office - Pinochet has called a referendum. The people will get to vote 'YES' to keep him, or 'NO' to expel him from office.

Gabriel Garcia Bernal plays Rene Saavedra, son of an exile, who has now returned to his homeland and is working for an ad agency. He is given the poisoned chalice of helming the NO campaign, leading to threats, state surveillance and a bitter impasse with his boss and friend.

Grassroots never really convinces us to vote for Grant Cogswell, whereas No effectively portrays the brutality of the Pinochet regime. Cogswell is a one-issue candidate - MONORAIL! - and his attempts to smear McIver come off as cackhanded. There seems to be not evidence outside his own strange imaginings that McIver is corrupt, and, in fact, he comes across as much more reasonable than Cogswell.

No, on the other hand, presents us with a campaign that does its job. The incredible 80s-ness of their TV adverts adds an extra layer of laughs to the film, and the NO advertising team inject as much humour and optimism as possible into their offerings, to tempt an embattled population to dare to vote against the all-powerful Pinochet.

Cogswell unfortunately remains a cipher of a character, whereas Pinochet, Saavedra and the architects of the YES campaign are drawn more convincingly. Perhaps because Grassroots emerged out of the book by Cogswell's campaign manager, the film's viewpoint remains firmly outside Cogswell's head, and indeed well out of his private life, so we never get to examine his motives. His lurch for power seems to come out of nowhere.

Conversely, No illustrates 1988 Chile's problems well, with archive footage, and through the adverts of the opposing campaign teams. The older generation is afraid of a return to the long bread queues of the socialism of their youth, so they're more inclined to vote YES to keep Pinochet. The younger generation is sick of the suffocating state control; the NO vote has their demographic sewn up. The Chilean youth also face the real dangers of police violence and of  joining the sad ranks of los desaparecidos.

Indeed, the most moving moment of the film comes about when the NO team view an advert they're sending to air, which features the mothers of some of the disappeared. As one viewer in the film puts it, "it gave me goosebumps." As a viewer outside the film - yes, me too. That's how they knew that they had to put the segment into the broadcast, and that's an editorial decision we could all get behind. The serious note works.

In No, the adverts might make us laugh, the characters might share a light moment, but we never laugh at them; we're with them, and we're scared for them. As the government cars emerge, following our protagonists, we begin to wonder who's going to make it to voting day.

Grassroots, unfortunately, gives us a blank slate of a buffoon and asks us to root for him on his way to political office. I voted No on that one.

Grassroots and No will be screened during the BFI London Film Festival, which runs 10-21 October.