is there space for another horror film?

Written by sandip mahal on 06 February 2010. Posted in creative journal

the horror film franchise is still surprisingly resilient and not really showing signs of slowing (some would say that the current incarnation has outstayed it's welcome). The question i ask is if there is space for a real rough and ready old school horror film that does what it says on the tin? The last good horror for me was Outpost. It didn't make you think too much and had a great genre story. Not a great story itself but a solid one that helped the movie along. My friend has written a horror film that is what it is and nothing more guys and girls alone/ monster picking them off one by one/plot twists and and an ending. So what's new? The approach to the structure is solely based on the old fashioned horror films of the 70's and 80s' that were on late night telly and proved to be influential. You will be surprised by how many horror aficionados have never heard of Race with the Devil, The Legend of Hell House or the superior and creepy Night of the Eagle aka Burn Witch Burn. well written genre stories with great atmosphere. That's all we want to make. It starts from the page, not with gore and some people don't understand that
Add new comment

Written by sandip mahal on 24 January 2010. Posted in creative journal

i have spent the last 6 months trying to make a small impact on my website with my content that hopefully is something different to what is offered by the established networks (as i have no budget there will be cracks here and there in the quality) and seeing as i am not handcuffed by the censorship and regulatory boards my material can be inflammatory if need be depending on what i am thinking at the time. In terms of marketing it out there, I have done the usual promotional routes via Social Networks and sending dvds to the press/column writers but how else can i push the brand further when one has lo/no money?
Add new comment

Written by nic on 29 April 2007. Posted in creative journal

Do you know those moments where everything seems larger than life? Where the taste of baked beans rivals haute cuisine? Where the hazy sunlight and slow summer pace make you feel so much lighter you could have lost a stone in weight. It's as if the great post production supervisor in the sky has decided to apply a luminosity filter, upped the brightness and contrast, balanced the audio.

Those moments where you stop and look at something - the light from the bottom of a glass of water painting mad Kandinsky shapes on the walls around you, the butter running molten tracks down your baked potato like volcano lava, the bird song drowning out the sound of the traffic for the moment. And if you were in a cinema you might notice the beautiful shot, or remark on the sound editing or visual effects. And in front of a computer screen going through rushes you might mark it down as 'Definitely Use' and on set even you'd quickly dive behind a camera and put a lens between you and the magical accidental unpredictable life that decided to reveal herself at that very moment.

"If you keep going down you'll hit the bottom"

Written by Nic Wistreich on 02 November 2006. Posted in creative journal 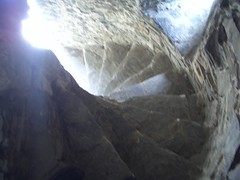 As I left the job interview yesterday, the words by the kindly woman wishing me off left me with no small sense of irony. In short I had bombed.

I sometimes wonder about orbits, how we tend to revolve around something or another - perhaps our partner or our family. After a big break up in 2003, I found myself gravitating towards anything that seemed stable enough to spin around. When that failed, I settled back and let the reverse happen.

Written by roguerunner on 25 January 2006. Posted in creative journal

The Art director and I have issues. He thinks I'm not taking my job seriously and I think he's a wanker. It's been a steadily deteriorating state of affairs since midmorning when he caught me pogoing across set on a spacehopper, my wee noggin bouncing up and down behind stage as I propelled myself along an imaginary race track. I didn't know it was a bloody prop and so when he comes up to me bellowing, I chalk him down as having a case of mistaken identity and propel myself towards the distant fire escape, my arse bounding up and down on the inflatable bubble, whilst unbeknownst to me the Art director gives chase, his saggy, pink jowls similarly rippling with the motion of the chase
Bounce, flop, Bounce, flop, Bounce, flop. B…
Read more: Art Depart Mental Add new comment

Written by roguerunner on 18 January 2006. Posted in creative journal

7:30am
Active. My right foot stamping down upon the brake, both hands gripping the steering wheel and yanking it clockwise, dragging my Maestro across the empty road and careering through the open gate into Park Royal Studio. Cringe, as something mechanical at the fore of the motor emits a loud, grating bark and my mouth stretches into a grimace as I wait for something catastrophic to happen. Meanwhile the motor trundles on, rattling its way across the car park and spluttering to a halt mere inches from a spanking new BMW.
Read more: an uncomfortable passage Add new comment