Written by Suchandrika Chakrabarti on 28 July 2009. Posted in Festivals 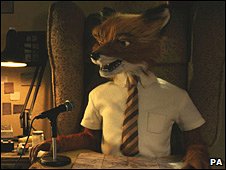 The Times BFI London Film Festival is proud to announce that this year's Festival will open on Wednesday 14 October with the world premiere of Fantastic Mr. Fox, from visionary director Wes Anderson (The Royal Tenebaums, The Darjeeling Limited).

Wes Anderson, George Clooney, Meryl Streep and Jason Schwartzman are expected to attend the opening night screening along with other members of the voice cast.

Mr and Mrs Fox (Clooney and Streep) live an idyllic home life with their son Ash (Jason Schwartzman) and visiting young nephew Kristopherson (Eric Anderson). But after 12 years, the bucolic existence proves too much for Mr Fox's wild animal instincts. Soon he slips back into his old ways as a sneaky chicken thief and in doing so, endangers not only his beloved family, but the whole animal community. Trapped underground and with not enough food to go around, the animals band together to fight against the evil farmers Boggis, Bunce and Bean, who are determined to capture the audacious, fantastic Mr. Fox at any cost.

The film was shot at London's Three Mills Studios and Twentieth Century Fox will release the film in the UK on 23 October 2009.

Sandra Hebron, the Festival's Artistic Director comments: "Wes Anderson's boundless invention and meticulous film making craft find perfect expression in this imaginative and hugely enjoyable version of a much loved story. We are delighted to open our festival with Fantastic Mr. Fox, and thrilled to host its world premiere."

On having the film's world premiere at the Festival, director Wes Anderson adds: "Fantastic Mr. Fox is a British film - based on a Roald Dahl book, set in the UK, produced in the UK - and so I am especially pleased to have been invited to be the opening night movie of this year's London Film Festival. We had a wonderful experience at the LFF with my previous film, and I am eagerly looking forward to introducing Fantastic Mr. Fox to the world in this wonderful venue."

The full programme for The Times BFI 53rd London Film Festival will be announced at the Press Launch on Wednesday 9 September. The Festival runs from 14-29 October 2009.