Edinburgh goes Under The Radar

Written by Laurence Boyce on 02 May 2008. Posted in Festivals 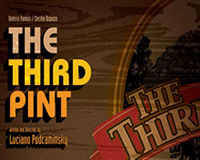 After being inspired by John Waters’ visit to the Edinburgh International Film Festival during 2007, EIFF Artistic Director Hannah McGill has announced a new strand of cult films for 2008’s edition.

Under The Radar will play host to films that ‘deploy low budgets to imaginative effect and range from being variously kitsch, gory, disturbing and hilarious.’ Casting its net wider than simply horror/sci-fi/fantasy – which the EIFF had previously catered for with such strands as Night Moves – the selection aims to ‘break boundaries of both art and entertainment, drawing in elements of experimental video and gallery art as well as subversive comedy and extreme genre cinema’.

The trailer for the 63rd festival, made up of 1,000 stills and created by O Street and Pete Dibdin is previewed below:

Films hailing from our shores include Bigga Than Ben: A Russians’ Guide To Ripping Off London, S A Halewood’s ‘dark and highly pertinent comedy [which] is a step-by-step guide to defrauding banks, shoplifting, joyriding on the tube and cooking crack cocaine’ whilst of particularly interest will be the World Premiere of Crack Willow, the feature debut of director Martin Radich which is described as a ‘shocking and highly original interpretation of the psychological effects of social decay’. Given that it seems to be an entension of Radich’s excellent short film Dog’s Mercury (one of the best UK shorts of the past couple of years, yet sadly under-praised in some quarters) the feature promises a to be quite something.

Rounding off the announced films so far are Blood Car, a ‘darkly comic horror which follows a teacher who invents a car that runs on human blood to combat the high price of petrol’ and the World Premiere of Spike  - a horror-cum-romance.