The Yes Men Strike Back at New Orleans event

Written by Nic Wistreich on 29 August 2006. Posted in Documentary

The Yes Men, a group of legendary corporate spoof artists who were the centre of 2005's feature documentary The Yes Men have struck again. On Monday Andy Bichlbaum, a 42-year-old former college teacher of video and media arts who lives in New York and Paris appeared at a conference in New Orleans before Louisiana officials and 1,000 contractors by presenting himself as a federal housing official.

"We basically go around impersonating bad institutes or institutes doing very bad things," Andy told CNN. "That would be HUD. At this moment, they're doing some really bad things."

Masquerading as Rene Oswin, an official at the Department of Housing and Urban Development, Bichlbaum followed Louisiana Gov. Kathleen Blanco and New Orleans Mayor Ray Nagin to the lectern Monday morning at the Pontchartrain Center in Kenner. He opened by saying "This year, in New Orleans, I'm ashamed to say we have failed," and went on to announce his department had decided to change their strategy and reverse its plans to demolish 5,000 units "of perfectly good public housing," with housing in the city in tight supply, he said. 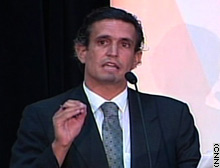 Former occupants have been "begging to move back in," Bichlbaum (left) said. "We're going to help them to do that." The government's practice had been to tear down public housing where it could, because such projects were thought to cause crime and unemployment, but crime rates in the city are at a record high and there is no evidence that people in the projects are more likely to be unemployed, he said.

The man added that it also would be essential to create conditions for prosperity. Toward that end, he said, Wal-Mart would withdraw its stores from near low-income housing and "help nurture local businesses to replace them." In a comment that elicited applause from the contractors and builders, Bichlbaum said, "With your help, the prospects of New Orleanians will no longer depend on their birthplace, and the cycle of poverty will come to an end."

Finally, he claimed, to ensure another hurricane does not inundate the city, Exxon and Shell have promised to spend $8.6 billion "to finance wetlands rebuilding from [their] $60 billion in profits this year,".

A new Yes Men documentary is expected for next year.

The Yes Men's most famous prank is placing a "corrected" WTO website at gatt.org (GATT is the treaty that led to the WTO). The fake site began to receive real emails from confused visitors, including invitations to address various elite groups on behalf of the WTO, which they obligingly took up.Showing up in newly-purchased suits, The Yes Men gave speeches encouraging corporations to buy votes directly from citizens. They argued that the US Civil War was a waste of money because Third World countries now willingly supply equivalent slaves. And they claimed that people should listen to the WTO, not the facts.

One of The Yes Men's first pranks was the satirical website www.gwbush.com, established for the 2000 presidential election to draw attention to hypocrisies on Bush's actual website. When asked about the site in a press conference on May 21, 1999, Bush responded that the website had gone too far, and that "there ought to be limits to freedom."

In 2004, The Yes Men went on tour posing as the group "Yes, Bush Can!" encouraging supporters to sign a "Patriot Pledge" agreeing to keep nuclear waste in their backyard and send their children off to war. They appeared at the 2004 Republican National Convention and drove across the country in a painted van.

Andy Bichlbaum, a member of The Yes Men, appears on BBC World to take full responsibility for the Bhopal disaster.

On December 3, 2004, the twentieth anniversary of the Bhopal disaster, Andy Bichlbaum appeared on BBC World as "Jude Finisterra", a Dow Chemical spokesman. (Dow is the owner of Union Carbide, the company responsible for the chemical disaster which killed thousands and left over 120,000 requiring lifelong care.)

On their fake Dow Chemical Website [4], the Yes Men first said as clearly and emphatically as possible that Dow Chemical Company had no intention whatsoever of repairing the damage. The real company received considerable backlash and both the real Dow and the phony Dow denied the statements, but Dow took no real action.

The Yes Men decided to pressure Dow further, so as "Finisterra" went on the news to claim that Dow planned to liquidate Union Carbide and use the resulting $12 billion to pay for medical care, clean up the site, and fund research into the hazards of other Dow products. After two hours of wide coverage, Dow issued a press release denying the statement, ensuring even greater coverage of the phony news of a cleanup.