Written by Claire Chabat on 27 November 2008. Posted in Feature film

Profoundly humane and stunningly aesthetical, Waltz with Bashir is not about dancing…not even around the bullets of one’s enemies as does an Israeli soldier in the eponymous scene. Through the personal lens of his experience as a soldier during the Sabra and Chatila massacres of the 1982 Lebanese war, Israeli director Ari Folman tells the universal story of young men and the harrowing consequences of war upon them. With his conscious use of drawings instead of live-action or even rotoscope animation, Ari Folman may have paved the way for a new genre: the animated documentary.

Written by Claire Chabat on 22 November 2008. Posted in Feature film

What is the difference between torture and punishment? According to Ridley Scott’s latest thriller, which casts a harshly critical eye on the spy game, it is simply the fact that one is efficient and the other is not. Set against the backdrop of the infamous “war on terror”, Body of Lies centres on the hardships of a CIA agent who heads to Jordan to track down a high-ranking terrorist. He soon runs into a web of deceit and lies: but these originate from his friends, not his enemies.

Written by Suchandrika Chakrabarti on 23 October 2008. Posted in Feature film It seems as though there are two films in Oliver Stone's W., fighting to separate themselves from each other. There is the story of George W. Bush (Josh Brolin), the president who took his country to war in 2003. Then there is Dubya, the son in awe of his father, George H. W. Bush (James Cromwell); who feels rivalry with his little brother Jeb (Jason Ritter); and who sees politics as the family business. The present of the film is seen through meetings surrounding the 2003 Iraq invasion, with Colin Powell (Jeffrey Wright), Condoleezza Rice (Thandie Newton), Dick Cheney (Richard Dreyfuss) et al. Through flashbacks, a light is shone on Bush's character and family.

In the production notes from this morning's press screening, Stone goes to great lengths to avoid saying that this film is about Bush being a bad, bad president. An example: "We set out to show his reasoning for the Iraq war as a function of who he is, his personal history." Stone goes on to say,

Well, poor Oedipus was the victim of a fate foretold before his birth, and Agamemnon came from a supposedly cursed family - you've got to feel a little sorry for them. Ultimately, though, they were never real; Dubya very much is. Mr Stone, it's a bit more than just "drama" when you suggest your incumbent president belongs in the same category as these possible "outright assholes."

Written by Suchandrika Chakrabarti on 15 October 2008. Posted in Feature film 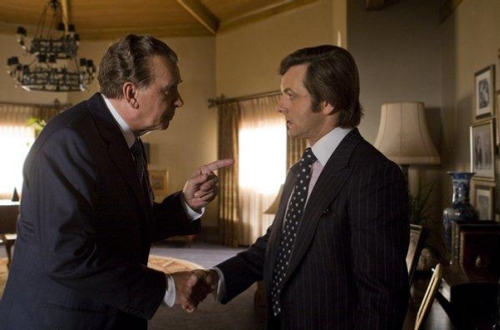 The LFF has chosen well for its opening night. Ahead of the final presidential debate between Barack Obama and John McCain in New York tonight, Frost/Nixon, the tale of a president undone in a television interview, has its world premiere in London tonight.

Surely you know the story? The 37th president of the United States was involved in some bad stuff called Watergate (let's ignore the wars and other things for now) in 1972. After this came to light, Richard Milhous Nixon (Frank Langella) duly resigned in 1974 and went a bit quiet in Florida until 1977. Then, cheesy light-entertainment TV personality David Frost (Michael Sheen) asks for an interview, and is granted one, for the easy money and questions. Frost's researchers find some good evidence for him to annihilate Nixon with. Nixon confesses to wrongdoing on TV. Frost goes on to greater things, Nixon gets to be remembered for that "I'm not a crook," line, and through the naming of Milhouse van Houten in The Simpsons.

Written by Suchandrika Chakrabarti on 10 October 2008. Posted in Feature film

Fundamentalist atheism is as old as religion, and possibly time. Back in a less liberal era, the 16th century, the playwright Christopher Marlowe got into trouble for trashing religion as a translator of the classical author Ovid ("God is a name, no substance, feared in vain"), as well as in his own stuff ("I count religion but a childish toy ").

US comedian Bill Maher shares a lot of Marlowe's sentiments; he believes "faith means making a virtue out of not thinking." Religulous is the result of taking that idea to some very religious people and basically bashing them over the head with it.

Written by Nic Wistreich on 06 April 2008. Posted in Feature film

With the rise of  so-called 'user generated content', a strange phrase that conjours up images of cinemagoers as drug users, and 'professional filmmakers' as dealers who would never use their own supply, it's inevitable that the film industry would have something to say on the matter. And as with buses and most films from those dealing with the massive (Armagedon, Deep Impact) to the micro (Antz, A Bugs Life), two come at once.

Interestingly, each come from cult directors - one French, one British - and both Michel Gondry (Be Kind Rewind) and Garth Jennings (Son of Rambow) had their roots in home-made animations and, later, music video. Likewise both skip the latest tech for basic VHS and focus on the oft' forgotten fact that making films is often much more fun than watching them.

What would Viacom's lawyers make of Rambow's Lee Carter, a film pirate of the highest order, who makes the short fan films, homages, mashups, recuts and so forth which Viacom have recently pulled from YouTube seem all the more harmless.Both are buddy movies, where the process of creation helps the characters to understand themselves and each other, while showing how filmmaking can bring a community - or family - together. And while Rambow is set in the 80s with child protagonists, Gondry, a self-declared eternal 12-year-old, paints a playful New Jersey suburb where time has stopped enough for it too to feel a work of nostalgia. Even the 'evil' property developer seems more outdated than the ultra modern Clamp in Gremlins 2.  Both feelgood movies slip, ultimately, into schmalz, but of distinctly British and American flavours. In Gondry's New York, little is resolved, but the community comes together and is, erm, United. In Jennings' Hertfordshire, the melodrama escalates, erupts with a tearful speech, and the family reconnects. Gondry's America has a far stronger community, tho Hollywood - in the guise of Signourey Weaver, perhaps looking for the gatekeeeper - is treated without sympathy.

Curious then that the film was financed by Universal Studio's offshoot Focus Features, whose lawyers - no doubt - would have shut down the Be Kind Rewind store for copyright infringement in a heartbeat. It was, after all, Universal who tried to take Sony to court in the 80s for producing a video cassette, the Betamax, which could be used for making private copies (as well as home movies). Thankfully they lost.

Likewise Paramount Vantage, who bought Son of Rambow at Sundance 07 for a stonking $8m, are part of the Viacom Group, who are currently taking YouTube to court in a similarly significant testcase for $1bn (a Dr Evil-shaped figure). What would Viacom's lawyers make of Rambow's Lee Carter, who in the opening scene is filming a new release in the cinema, which makes the short fan films, homages, mashups, recuts and so forth which Viacom have pulled from YouTube seem all the more harmless. The parrallels between the two films - especially when you read Tom Fogg's interview with Jennings and producer Nick Goldsmith in 2000, where they idolise Gondry and talk of Rambow for the first time - is a little uncanncy.

But there are differences, namely in the filmmakers' sensibilites. Gondry paints his surreal vision on almost everything he sees, a kind of live action cartoon where realism is generally forsaken : in the film and the 'sweded films' cinema is a fantasy land where we are to fly away from reality and its problems. In Rambow, the surrealism is mostly in WIll's mind, projected onto the represive environment he's surrounded by, literally bursting out of the edges of his Bible. The humour is subtle and understated. And cinema becomes more a metaphor for personal struggle and the hero's journey. In fact the French star of the kids film is ultimately dismissed as a style-conscious fantasist (tho still largely adored).

Either way, these films are both timely and fun. And if one of them doesn't inspire you to put down the funding application and pick up a camera, and remember how perhaps before you got caught up in the 'film business' you too just loved making movies, the other one should.

Written by Suchandrika Chakrabarti on 26 November 2007. Posted in Feature film

Cocaine Cowboys is a documentary looking at the rise of drug gangs in 1980s Florida. It was released in UK cinemas on 23rd November, so should be on near you.

For those unfamilar with the events of the period, the documentary tracks the transformation of Miami from sleepy retirement village to a place made rich through drugs and violent killings.

Read on for the trailer, which is fairly NSFW...

We Are Together: "we cannot all shout at the same time, but we can sing together"

Written by Nic Wistreich on 02 November 2007. Posted in Feature film

We Are Together (Thina Simunye) has as its backdrop one of the most urgent (and shameful) issues of our time: the spread of HIV, Africa's 1.2 million AIDS orphans and the lack of access to life-saving anti-retroviral (ARV) drugs. That less than 17% of HIV sufferers have access to the drugs in a continent already overwhelmed with famine, poverty, war, corruption and hoards of western Celebrities (collective noun - 'a reception'?) is so hard to comprehend it's generally much easier to pretend it isn't happening.

But rather than focus on the issues we all too often chose to ignore, we are offered the African approach to dealing with suffering: celebration, communion and song. Humanity's 'incredible capacity for laughter and humor' in these situations was a driving force for Taylor in his tale of the child singers of the Agape orphanage in South Africa.

Read more: We Are Together: "we cannot all shout at the same time, but we can sing together" Add new comment

Written by Suchandrika Chakrabarti on 01 November 2007. Posted in Feature film

Wes Anderson's The Darjeeling Limited will close the London Film Festival tonight, with a sold-out screening in the West End.

The film follows three brothers - reunited for the first time in the year since their father's death - who take a train journey across northern India, in the hope of renewing their relationships, finding someone they lost and, in true gap-year style, finding themselves. Suchandrika Chakrabarti, who has been covering this year's festival, takes an advance look.

Written by Suchandrika Chakrabarti on 27 October 2007. Posted in Feature film

Sicko was shown at the London Film Festival last week. It is Michael Moore's latest effort, looking at the mess that is America's privatised healthcare system, relying as it does upon insurance claims to pay medical bills.

As Moore's average, middle-class, insured subjects show us, though, having the insurance may still not be enough. The industry does all it can to avoid payouts, denying the needy of healthcare.

Written by Suchandrika Chakrabarti on 25 September 2007. Posted in Feature film

Subtitled "The Oil Crash," this is, as co-director/producer Basil Gelpke puts it, "A film that promises to be a bit of a downer." He isn't  really joking: the documentary looks at the amount of oil likely to be left in the ground (not much) and what preparations have been made for a post-plentiful-oil society (not many). It's a wake-up call that comes without the hope of rock-steady solutions.