Written by Nic Wistreich on 11 September 2006. Posted in politics and society 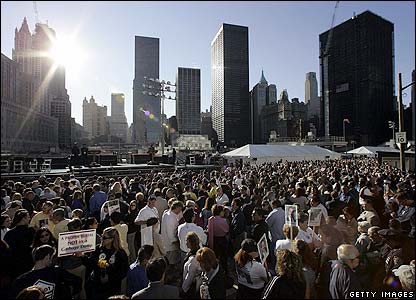 Jon H from Finland at JonHs.net has pulled together a remarkable list of 9-11 related documentaries online. All are free to watch and most are created by unfunded groups and individuals. There's a few extreme conspiracy theories but it's is still an impresive collective example of citzen filmmaking.

So much seems to have happened in the five years since Tom ran up the stairs of the Netribution office building to the roof to tell me that two planes had crashed into the World Trade Centre. He'd watched the second plane hit live after his brother had called from The Ivy asking what was going on as two of the more powerful people in British news were besieged during their lunch by frantic paging. I meanwhie had just filmed Natty, a politically alert British rapper perform his song 'There's A War Going on Outside'.

The rest of the day was a surreal rush around London in a daze of shock, interviewing other socially driven hiphop heads such as Task Force,  Rodney P, Skitz and Fallacy. It was the first - and indeed last - time I had paid-up camera and sound assistants working for me and in the midst of  this I managed to not ask some of the UK's best and most conscious rappers one single question about what was going off around us, instead just sticking to script. (and I still haven't forgiven myself).

And then coming home, curling up with my girlfriend, who didn't want to watch the TV, yet still watching mesmerised the same footage on channel after channel, with tear filled eyes. The next day I remember driving with Tom to a recording studio, with all the newspapers we could buy. We wondered if it was the beginning of the end and if nuclear strikes would begin the first wave of retribution, yet it didn't make us deviate from our shot list. I wonder what it would have taken.

Below the links is the write-up from Dashiel St Damien - our then New York correspondent - shortly after the planes first hit. I find her cheerfulness amidst the tragedy poignant still.

The End of the World (Trade Center) is Nigh!

On Sunday we tuned in to see "Band of Brothers" mainly to see whom we knew in it. We carried on watching cos it’s pretty bloody good and it got me to thinking about a way of life that complacent Gen X’s like myself cannot comprehend.

A few years ago a visiting American friend made a rather glib "It was so long ago, who cares" comment about the VE /VJ celebrations to my parental units. This lead to one of those protracted "you don’t know you’re born. We slept under the dining table, went to school wearing a gas mask, had only one egg to feed a family of nine for a month!" sort of lectures. We squirmed. They were, as parents so often are, of course completely right. I know we hear the "we shall not forget" speeches, but we do. We have.

I vaguely remember the Falklands but it was so far away. Kuwait was made personal because my boyfriend at the time was sent, I knew guys that didn’t come back, but even so it was still far away.

I am British- grew up in Blighty but buggered off to NY for university and drama school and been here ever since, this is my home; the explosion was three blocks from my old office. My apartment was in the area that will be closed to civilians for the time being.

I was in Harrods the day it was bombed - I had been pick pocketed. Without money to shop, we went home. We missed it by an hour.

In 1993 I went to class opposite the world trade center. It was Friday, my friends and I always met for lunch on the ground floor of the world trade center on Friday. I had an exam that day but being the bottom-snogging straight A student that I was, I wangled out of the test. I wandered around the trade center but couldn’t be bothered to wait another half hour for my friends. I went home. I heard the explosion as I walked in to my flat.

Today, I think, went some way to reminding us just what a privileged existence we have. Suddenly getting a certain actor to commit to our feature or the worrying wobble that my bottom has developed since becoming car-bound in LA, didn’t seem all that important.

This affects us all, it’s so awful and so close to home. By six degrees of separation or less, there are few of us whose lives will not be touched.

Three of the four aeroplanes were scheduled to fly to LA, the Emmy award-winning producer David Angel responsible for Frasier and Cheers amongst others, and his wife Lynne was on one of those flights. The Emmy’s have been cancelled for this weekend.

In NY last month Madonna cancelled a concert due to laryngitis, there was to be no make up concert but tickets were refunded except for those from scalpers, they then intended to have a "no refund policy". Her LA concert has also been cancelled I think EVERYONE will understand this time. All sporting events are off and theme parks are closed. Even Disneyland, the company that has had the temerity to publicize their "Electrical Parade", in a time of electric shortages and rolling black outs has closed their park. It is the first time since the assassination of JFK.

As I write this it is 12 hours since two planes crashed into the twin towers, 12 hours since I started watching the news. 12 hours since I started trying to call NY. I still haven’t been able to get a line through. The wonders of the Internet have meant I have received a lot of messages to confirm the safety of my friends. It seems quite a few lives were saved by "boring meetings uptown", or "running late to work". Well thank god for hangovers and lousy subway services).

I still have many, many unanswered.

As I write this I feel helpless, there is nothing I can do, I would like to give blood, unfortunately I am black listed for life. I lived in the UK during the 80’s. Despite being vegetarian I am still considered a potential mad cow carrier. Of course I have an ex husband that believes I have had it for quite a while!

Thoughts prayers and good wishes for us all…